It’s been a long time coming, but the first single from Mr Benn’s long awaited debut album is due out next month on Nice Up! records. The track is a heavyweight skanking hip hop tune featuring Brumaican badman Serocee. More info on this soon, but in the meantime you can check the preview here:

David Cox is an artist who makes fantastic pieces heavily informed by his musical passion for reggae and dub. A lot of his pieces are based on specific tracks or albums, and his work has a wonderful vibrancy and rawness that perfectlty conveys the energy and vibe of the music. He’s recentlly been working with Mr Benn on an ongoing project based on ‘Stars’ by Cornell Campbell which is his favourite track of all time. Mr Benn has recreated the Stars riddim for this project and David has made a beautiful stop frame animation of his work inspired by the tune to accompany Mr Benn’s dub version. Check the video here and watch this space for further developments within the project…

Well it’s been a while, we’ve been well busy up here at SOS towers, mainly geting married! Thankfully the rain held off for a few hours so we had a wicked party with some wicked music too (stand up Jstar, Shepdog, Queen Bee and Brassroots).

After my radio partner in crime Jon Leisure decided to sod off round the world for a few months, I’ve been manning the controls of our show single handedly. Last month we dropped an awesome moombahton mix from Jstar alongside the usual bassline heavy mashed up niceness. The next installment goes out this friday 8-10pm on Space Invader Radio, so if you’ve in any kind of position to do so, tune in cos I’ve got loads more fantastic new treats for your ears. You can check out all the previous shows over on mixcloud

We’ve Also finished our line up for the Big Red Tent at this year’s UK WOMAD festival too, and I have to say it’s looking rather tasty even if I do say so myself! Full details to follow, but I can announce that amongst others performing will be Mungos Hi-Fi ft. Kenny Knotts & Soom T, the Dub Pistols, Kitty Daisy and Lewis, Submotion Orchestra and the Nextmen. I’ll be back with the full line up very soon!

Gig wise, you can catch myself (Mr Benn) warming up for the legendary Horace Andy on 9th July, more info HERE. 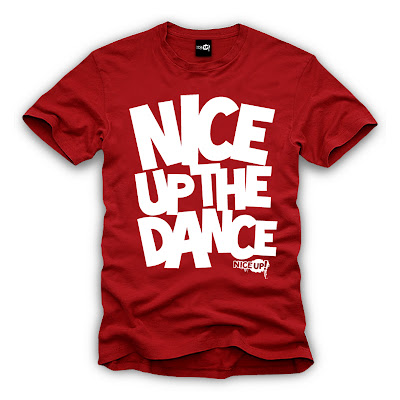 And for the style concsious amongst you, I thoroughly reccomend you grab yourself one of these lovely NICE UP! t-shirts, and be the envy of all your friends this summer. There’s four tidy designs to choose from, but they’re extremely limited, so best to bag one while you still can HERE.

That’s it for now, but keep coming back cos we have plenty more exciting news, feebies music and chit chat coming soon.

25th Feb will see the latest release from tip top Polish reggae producer Dreadsquad. “Sweet Thing” features the vocal talent of the mighty Tenor Fly on an uptempo ska riddim sure to get dancefloors smiling and skanking all over the shop. To help promote the release, Dreadquad has put together a promo mix of all the different versions of the track which features remixes from Adam Faz, Mr Benn, Riddim Tuffa and more. You can download the promomix for free on soundcloud here:
SF004 – Dreadsquad & Tenor Fly – Sweet Thing (promomix) by Dreadsquad

Check out the full version of the Mr Benn remix here:

There’ll be a limited edition 12″ vinyl out in all good record stores soon, or you can head over to Juno and buy all the digital versions HERE
mrbenn Uncategorized February 14, 2011 0 Comment

Our man in Athens Blend Mishkin has been dropping some seriously heavyweight reggaecentric beats and remixes lately, as I’m sure anyone who copped his massive ‘Love Cup’ tune last year will agree. March 28th will see the release of another low down dub hop cut featuring the vocal talents of BNC (Bruises’n’Cuts) called ‘Disco Vampire’ with remixes from Mr Benn and Belgium’s Turntable Dubbers. In anticipation of this release Blend has generously decided to give away his DJs version for free, so go get it here:

Error: Twitter did not respond. Please wait a few minutes and refresh this page.